Really good effort behind these nachos – Going local with the Walt Wit white cheddar sauce made with the Philadelphia Brewing Company’s witbier, fresno chiles, and some solid pulled pork. 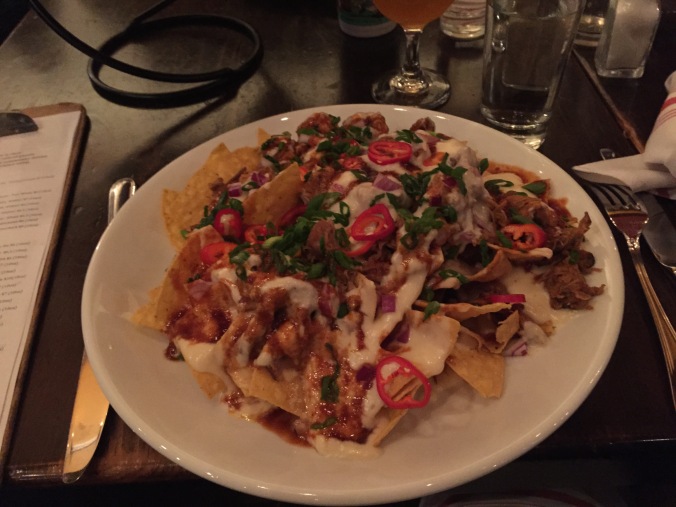 I just can’t get behind that Love Stout BBQ sauce on nachos. BBQ sauce on nachos is maybe even behind BBQ sauce on pizza. I’m sure it has its proponents, but it’s too much sweetness for me. The heat from the chiles wasn’t enough to balance it out. Also, at $15, maybe the most expensive nachos in the city.

Overall, a tasty plate of nachos. 4/5 pickled jalapeños. Eat this while having a bunch of beers.

They can’t all be winners. Canned black beans, shredded cheddar and carne asada. That’s it.

With a couple of ice cream scoops of guacamole and sour cream.

Wahoo’s Tacos is a new joint up by Drexel that replaced the never crowded and not very good Mikey’s. They have a great outdoor space to work with, hope they can step up their nacho game for the warmer months. I mean, I’ll eat these, but way too much chip in the chip/fixins equation.

And that industrial margarita mix has to go too.

These nachos are the truth.

Quetzally’s Nachos Campechanos come with chorizo as a given. Then you pick the bonus meat. I picked chicken in the one above. Chorizo should come standard on more things. I’ll also save you the Googling and let you know that Campechanos means that it comes from the Mexican state of Campeche, which is right next to Cancun. What’s important is that they must have some dope nachos in Campeche. From what I gather, in practice it means that you put a shitload of different stuff on your nachos. Quetzally’s homemade chips hold up under the weight of this flavor mountain.

Jorge is killing it at Quetzally, located in what used to be Chopstix on the 1200 block of Fitzwater. I had my birthday party there, but you’re more interested in hearing about the nachos than my personal life.

Get some guacamole to throw on there too – he puts nopales in it which works.

4.7/5 pickled jalapeños. Eat these now. Or if it’s Monday, eat them Tuesday. Quetzally is closed on Mondays.

Okay, take a good look at these nachos. Notice anything weird? Here’s a hint. See Danielle’s dirty plate in the top left corner of the picture? That’s from the first round of nachos that we had at Loco Pez. These chumpies are so good that we reloaded for Round Two.

The Nachos de Kenzo are contenders for the CBL Heavyweight Nacho title belt. Just look at them. You’ve got some jack cheese, some cheddar, and I’m pretty sure some Oaxaca as well. Loco Pez also gives you two ingredients that you’re going to be seeing a lot of in the title contenders: pickled onions and chorizo. Why do these make nachos so good? I have no idea. I just take pictures of nachos and then eat them. What else is there? Carne asada, chicken, guacamole, crema – I’m pretty sure they just throw whatever is back in the kitchen on these guys.